“Should we sign a contract before each sexual intercourse, now?! This is insane!”

Yes, indeed. It is definitely insane to think that a law recently passed in Sweden, placing consent at the core of any rape or sexual assault accusation, automatically forces all parties involved in a sexual act to draft and sign a legally binding contract prior to any intercourse involving penetration. The problem is that our society is unable to grasp a concept that should be the main driving force in any human interaction – professional, personal, intimate, or public. Before our birth, our life is shaped on the basis of this concept’s fragile survival.

This notion is the infamous C-word, consent, and it is crucial not only in our sexual life, but in more or less every single aspect of our lives. It shows up when you switch on your phone, when you commute to work, when you need medical care, when you walk in a park etc. It shows up when you have tea with friends, when you listen to music, when you visit an exhibition, when you purchased the phone or computer you are using to read this article. This is a factual statement. Here comes the opinion-motivated one: this concept, omnipresent and yet, paradoxically almost absent from our lives, is highly feminist and has a significant feminine character. Yet, men benefit from its existence more than women – this, again, is a factual statement based on statistics readily available by anyone interested in the topic.

Before going any further, I need to add an essential sentence, unfortunately. I hope one day, the sooner the better, this sentence will become obsolete. Please take into account while reading it that this article may contain sensitive information that could act as triggers for victims and survivors of sexual assaults.

The opinion that I boldly expressed in the introduction is based on a very tangible biological fact and a societal phenomenon. Women, as usually everyone knows, have their genital organs inside their body, while men have them outside. Apologies for stating basic reproductive biology facts here, but it seems this difference is too often forgotten or discarded. Its consequence is that a woman’s healthcare is necessarily more intrusive than it is for a man. Transgenders’ experience is very similar to women’s in this respect: their genital organs are basically at the centre of public attention, as if they had to put them on display to secure some sort of entry ticket into society – “but wait, do you have a vagina or a penis?” (I am still trying to understand why anyone would care about it, apart from the transgender person themselves…)

Therefore, due to the intrusive requirements of women’s healthcare, the C-word shows up on a regular basis for them, even if they have never been confronted to any form of assault. Having a complete stranger’s fingers inserted in your vagina to perform a gynecological check-up is something men can hardly relate to, usually. Also, men will very rarely experience the rather disturbing situation where a consultant anaesthetist wrongly inserts a suppository in their vagina instead of their colon. Don’t get me wrong, I do not imply that gynaecological check-ups and medical mistakes are less of a problem for men than women, I simply state the obvious: very often, those check-ups and wrongdoings are less intrusive in their nature.

Nevertheless, that biological fact does not mean that men are completely exempt from C-word sensitive situations – and this is where feminism steps in. Our world is currently shaped based on a very patriarchal and sexist approach. This means that women get paid less, men are not allowed to have emotions, and babies are given a blue or pink bracelet to identify their sex right after discovering our otherwise colourful world for the first time. This means that women do not really get their say in how the society is shaped, unless they stage mass demonstrations or share appalling hashtags. It also means that the world is fashioned by people who have no idea what it means to be forced to accept intrusion on a regular basis – for healthcare, remember the previous paragraph. Of course, many – far too many, let’s be honest – men experience at some point in their life unlawful intrusive behaviour, namely rape. But lawful intrusive behaviour remains, as explained above, a rare situation for them. Hence, they do not perceive passiveness the same way as women do; and we are drawn to becoming more and more passive in our daily lives.

I could keep adding questions. Tons of them. And each one of them would be relevant to this article. 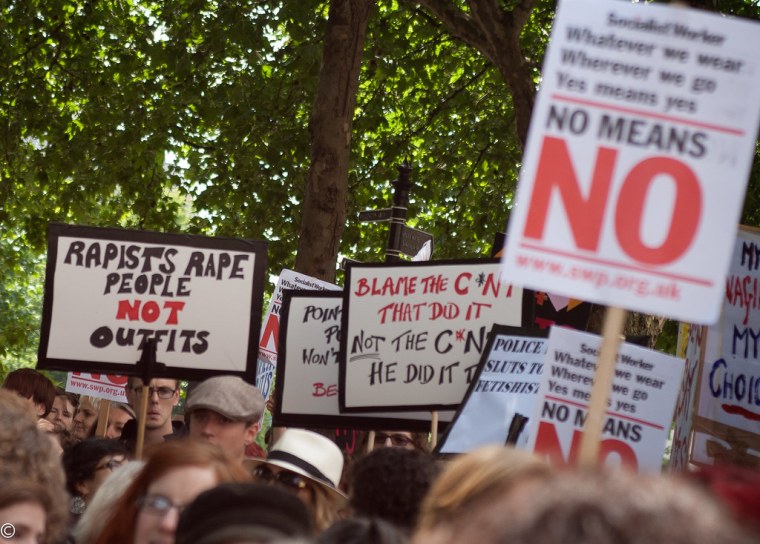 In a world where consent is almost entirely absent, it is difficult to find your way if you have ever been confronted to a distressful moment when this right to consent was violently taken away from you. We forget that victims and survivors are not such a small minority as we would like to think. Everywhere in the world, millions of women and men, adults and children, are in this situation. And the world ignores them, for it was built on a model where consent is not essential.

We need to change this, and we need to do it now, while the “Me Too momentum” is still casting its spell on our national and international authorities. A first step would be for people working in healthcare to assume their patients might have been through some sort of potential trauma instead of assuming they are fine. Or even better: ask. We all have to go through medical appointments, it does not mean we feel comfortable with it. Unfortunately, the absence of a culture based on the concept of consent makes such an approach highly unlikely – we just assume people are fine with “it”, they booked the appointment, after all!

For the sake of marketing and business, but also comfort and speed, we find it acceptable that an application on our phone can access anytime and anywhere our data after we gave it a one-time authorisation. I certainly hope that this is not ground-breaking news to you but giving consent once does not mean giving consent for a lifetime use of this consent. By getting married, your partner did not give an unlimited and unconditional consent – look up the divorce rate in your country and if you are still wondering what I am talking about, your next search should be about intimate partner violence and domestic abuse. Nor did your Tinder date give a similar consent after having sex with you once. Nor did this person on the bus give consent to a long discussion for the whole ride or to you making physical contact with them by politely (or drunkenly) smiling at you.

The major issue resulting of this general situation is that men are now struggling with the mere concept of consent following the recent upheaval triggered by Weinstein’s criminal behaviour revelations. Men, and some women, too. People in general are staring confusedly at this word, unable to grasp its meaning.

Consent is not about drafting and signing a legally binding contract. Consent is not a barrier preventing you from doing something. Consent is the door that will let you in. Consent is a clear, explicit and unequivocal verbal or non-verbal signal. And consent should be at the core of every single human interaction we have. It would change many lives, including some you might not even think about at first.

In laws related to rape, consent is rarely the core issue. You have to prove that there was violence, threat, constraint or even – wait for it – surprise (this is the word used in the French legislation). Nonetheless, nobody will ask the person accused of rape if they can prove there was consent prior to the penetration, whereas this should be the most important aspect of any rape or sexual assault or sexual harassment case. But how could you make consent your priority in such a legislation, when it is not your priority in any aspect of your life?

The absence of consent culture and the omnipresence of rape culture in our society leads to situations where judges are apparently unsure how to define “affirmative consent” at court. Let me just ask: why “affirmative”? Consent is systematically affirmative, by nature and definition. Rejection is not. You can refuse to answer a question by ignoring it, for instance. However, verbally or nonverbally, your acceptation of the question will be obvious and affirmative.

Consent is also a problem in popular culture, for instance in most films you are watching.

As this article rightfully points out, discrediting female characters’ rejections and advocating male characters’ abusive or toxic behaviour is very common in fiction. Unfortunately, people tend to project fictional scenarios onto their own lives, which in this case means normalising domestic abuse and sexual harassment or even rape. (You might want to read the article quoted, by the way, if you find Han Solo to be quite romantic with Princess Leia…)

Women (or fictional female characters) are not exempt from this, though the pattern on the male side is significantly more present. No, a woman will not tell you to go get a life on another continent if she is secretly attracted to you. Saying “no, I don’t want to have a drink with you” is not a false negative. Repeatedly asking this person to have a drink with you might quickly turn into harassment, it is certainly not romantic, and you should reconsider your approach to relationships if you think it is.

In terms of solutions to this C-word issue, let me be clear: education is the answer, not so-called ‘consent condoms’ or other inadequate responses. We need to educate children in a way that puts consent at the heart of anything they do. If you are wondering how is that even possible, I would recommend you head to Sweden, where the ‘consent law’ regarding rape and sexual assaults was received with a “if you don’t know how to be sure that your partner consents, then go back to school, we can’t really help you”.

Schools and parents should be actively involved in re-shaping and re-thinking our society on the basis of consent. It is a feminist concept, and women are the primary victims of consent denial. However, all human beings will benefit from it: won’t you feel better if you know that your child will live in a world where their right to consent will be respected? Is it really that hard to differentiate rejection, indecisiveness and consent? Yes. No. Not now. Maybe. I don’t know. Or silence. Which one of them is consent?

And do you remember when was the last time your right to consent was denied? The last social media notification (which systematically includes geolocation, among others) might be a first clue. Consent is a feminist concept, for women know far too well its absence’s violent impact. Nonetheless, men will certainly feel more comfortable in a world where consent is properly taught and explained, instead of making it look like a very dangerous legal hazard.

This article was inspired by personal experiences and therefore displays personal opinions that do not represent an official opinion of the Euroculturer Magazine. Nevertheless, if consent was not a problem, then why would “problem of consent” give 404 million results on Google? And why would sexual violence statistics be so high?

Featured picture: Jeanne Menjoulet, Flickr (it says, in French, “Who does not say anything does not consent to anything”)