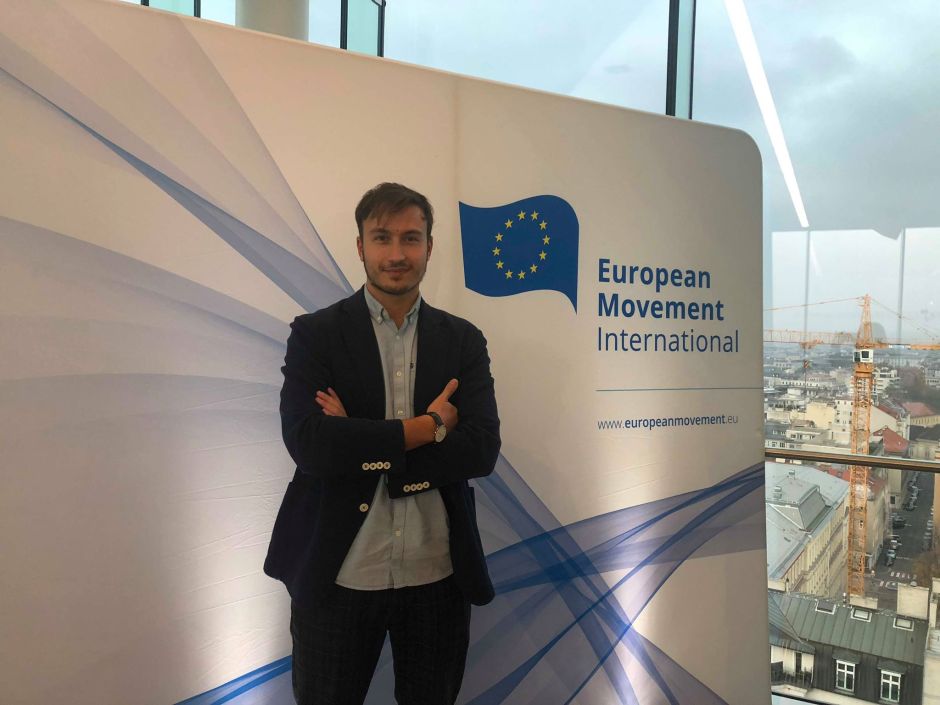 Marc Kendil (2017-2019, DK) started his Euroculture life in Groningen and Strasbourg. He completed his third semester by doing an internship at European Movement International (EMI), the largest pan-European network of pro-European organisations, headquartered in Brussels, Belgium, as an EU Affairs Trainee. With his multinational identity and upbringing, he considers himself a child of the EU project. Marc has a background in American Studies with a minor in International Relations, which is rooted in his long-standing interest in North American society, culture and politics.  Wishing to bridge the gap between his upbringing and former studies, he took up MA Euroculture and hopes of pursuing a diplomatic career in the future.
Thanks Marc, for taking the time to share your experience!

I wanted to do an internship during my third semester for several reasons. A research track did not interest me as I do not want to carry on into the field of academia nor do a PhD. More importantly, I wished to acquire some concrete experiences from a professional perspective during my Master’s in order to increase my chances at finding employment/internships right after graduation. Doing an internship during a MA is also incredibly beneficial to supplement the theoretical.

2. Can you tell us what you were doing at EMI?

My duties comprised of three main tasks. First of all, I worked on a weekly newsletter that was sent out to EMI’s members and subscribers, containing a summary of four different European articles on Brexit. Secondly, I was in charge of a weekly institutional agenda, which was the lengthiest and most time-consuming task: it involved researching the pages and databases of every EU institution as well as non-EU institutions in order to create an easy-to-read agenda with upcoming and relevant EU events. Lastly, I created a weekly newsletter, similar to the event agenda, however, it differed in that it contained five recent news items and five upcoming events from EMI’s members.
Apart from these, I also dealt with ad-hoc tasks, assisting colleagues and the Secretary General. These tasks includes anything from event management, to researching, to policy position drafting, and editing/providing content for the European Movement website. I was responsible for the creation of EMI’s 2019 presidency calendar — that contains key dates of the Romanian Presidency’s, EMI’s and members’ key dates — which I did in cooperation with the Romanian Permanent Representation in Brussels. It was an interesting side project/soft-diplomacy task which gave me insight into stakeholder management. In the end, I sent out more than a thousand calendars to high-level stakeholders, and EMI members and contacts.

3. What were your expectations of the internship placement and how did it match with the reality?

Honestly, I had nearly no expectations at all, so I can say with confidence that the internship experience has really expanded my horizon and taught me a lot. The only minor expectation I had was that I hoped I would have the opportunity to work with themes/tasks related to my academic interests, like far-right nationalism, the migration crisis, and EU foreign relations. Unfortunately, I did not end up working with such themes, but to my surprise, the plethora of duties and responsibilities I had led to an amazing experience I will never forget.
What I enjoyed the most about my internship was the extent of variety and interdisciplinarity of the tasks I was assigned, which were often very different from one to another. EMI insists its interns should get acquainted with the Movement’s different areas of work, and ultimately, to learn skills in a variety of subjects. In sum, I started with little to no expectations and left with much-needed skills that I feel have made me more prepared for the professional world.

4. Did you find your coursework relevant to the internship?

Not really, and that’s not necessarily a bad thing. I believe that our degree has given us the basics — of let’s say, in my case, the history and functioning of the EU. The way I see it, all that theory serves as a building block/general knowledge about the world and our environment. I am convinced that one of MA Euroculture’s strongest assets is the provided training in quality academic writing which I think serves each one of us well in terms of preparing for the professional world. I also believe that the programme’s interdisciplinary and broad nature caters to different individuals with different backgrounds, so of course, the courses will impact us differently (i.e. other students will have a differing opinion when answering this question). Looking back, I don’t recall a situation where I had to use any coursework material/knowledge to complete my tasks. That can also be due to the nature of my placement and given duties.

5. What do you find most challenging about your internship semester?

Next to an unpaid position (which forced me to dig deeper into an already existent debt), I would say that the most challenging would be time management, or rather, lack of time which is a stark difference to a regular semester! It was in one way comfortable to have a stable 9-to-5 job, however, I felt constrained on a daily basis as I could not do many things I wanted/planned. Other than that, I can not complain as I lived 10 min on foot from work and had wonderful colleagues.

6. What have you learned so far about yourself in the course of this internship semester?

I learned that even though I like the type of work which EMI does, the lobby sector is not one I would particularly like to work in neither am fond of. Having the internship at EMI only reinforced my desire to engage differently with European politics and/or work in the sphere of diplomacy and transatlantic affairs. Additionally, I learned that I am capable of a 9-to-5 job; something many students fear or cannot imagine!

7. Could you tell us about your internship preparation process?

The first time I heard of EMI was on the trip to Brussels during my first semester at Groningen. We visited the organisation and Petros Fassoulas, the Secretary General, organised a small meeting for us in which he explained the aims and structures of EMI. Frankly, I only applied to EMI in early summer as my priorities were Danish embassies and larger international organisations.
The application process was rather fast; once I had sent my application by mail, I received an answer within a few days and an interview was scheduled shortly thereafter. I then received a confirmation within two days, so I would say the application process can take anything between a week and ten days! I would like to add that the application process is rather simple — one has to send a CV and a short motivation letter to the secretariat’s email address.
Concerning my general preparation, I just made sure I had a solid CV (using the Europass format) and a straight-to-the-point motivation letter. I am rather paranoid when it comes to Skype interviews, so I also wanted to make sure I would be in a clean and quiet environment, dressed in semi-formal attire.

8. Any tips for fellow Euroculture students who might want to do an internship or work at EMI?

Well, I would say APPLY, because it is a rewarding experience and a solid addition not only to the Euroculture degree but also your CV. EMI is a great and interesting organisation; especially the secretariat where you would work. It has a rather “flat” hierarchy. The Secretary General is an intelligent, skilled, and humorous person, and the staff is composed of kind, funny, and helpful people. Also, EMI has a stable partnership with our degree, so they tend to hire one or two Euroculture students per year! Otherwise, I would recommend prospective applicants to write a good motivation letter, prepare a solid CV, and to be prepared for a Skype interview if selected. Other than that, good luck on the application and enjoy the ride!