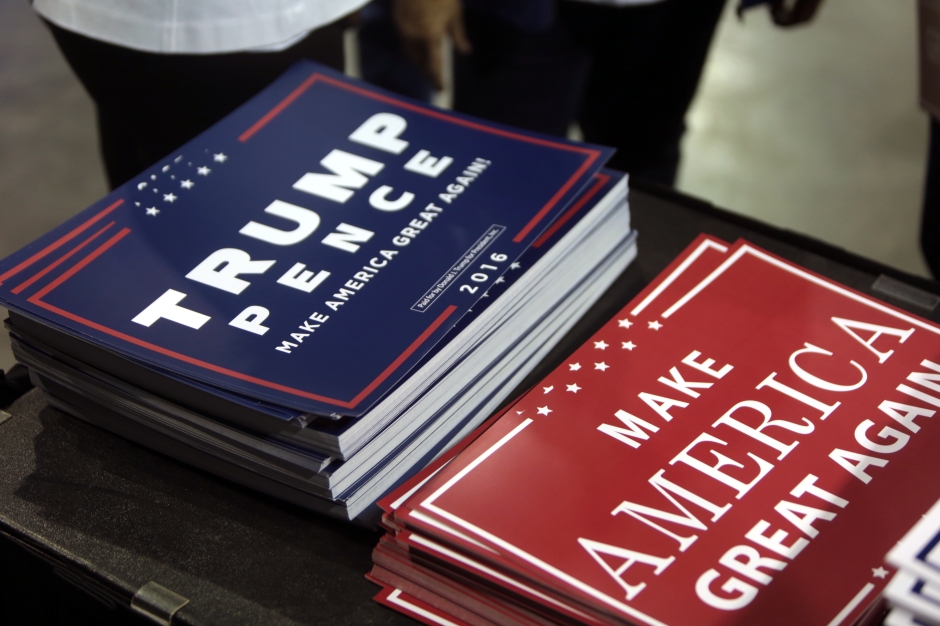 Euroculturer correspondents Elisa Abrantes and Sabine Volk reporting on an all American experience.

It’s a Thursday evening in Cincinnati, Ohio, and the atmosphere outside the US Bank Arena is slightly tense as people queue to get inside, their T-shirts and posters ready to show support for their preferred competitor. We are at the largest indoor arena in the Greater Cincinnati region, boasting facilities that can fit over 17,000 people, and tonight it’s almost full. People of all ages have come here, and we see couples, families, groups of friends mixed into the crowd. As we pour into the stadium with other supporters, the chanting “USA! USA!” becomes louder and the atmosphere more rowdy as we are hit with booming music, chants, cheering- we try and find some seats. The colour red dominates the stadium; T-shirts, lights, posters…

The screens above the field do not show close-ups of the music artists or hockey players that usually occupy the spotlight in this arena. The centre of the arena is occupied by a single stage, with a single podium and single microphone, and shortly after we find our seats, presidential candidate Donald Trump takes the floor. While Frank Sinatra sings “New York, New York” the crowd goes wild and posters and smartphones fill our view. After proclaiming his love for Cincinnati, Trump begins his speech, and the Europeans present try to catch as much of this as possible beneath the deafening cheers.

Trump’s speech came as no surprise; it was the same rhetoric he has used in his other speeches- consisting mostly of insults targeted at “Crooked Hillary” and her endless lying and stealing from the American people. There were constant mentions of the emails she deleted (over the course of the rally he raised the number from 30 000, to 33 000, to 39 000) and the corrupt “Clinton-clan”. Like in the debates, he tries to convince with numbers. Luckily, there is no fact-checker around. His promises included “making more jobs”, “making the economy better” and of course, “making America great again!” How exactly these promises are to be achieved is yet to be established.

His speech was wonderfully in tune with the populist technique whereby a corrupt political establishment is constructed, an establishment which he has come to save the American people from. His use of simple vocabulary and ideas that are easy to comprehend is an example of the ‘everyman’ language which reinforces the notion that he is ‘one of the people’. He doesn’t aim to trick and deceive through complicated terminology, and instead portrays himself as ‘political translator’ between those cheating politicians and the people, simplifying not only political language, but politics itself so that it may be easily accessible to all American citizens. The price to pay, of course, is a political figure-head that has little knowledge of the complexities of politics.

A parallel can be drawn here between what we witnessed that Thursday evening in Cincinnati, and what we are increasingly witnessing in Europe (perhaps a good example is what we heard during the Brexit campaign from Eurosceptic British politicians). Again we see an urgent situation constructed by these populist politicians; a catastrophe, a real disaster (the flood of illegal immigrants, the decline of American industry) is looming on the horizon, entailing the complete break-down of the country and society- a disaster that can only be avoided if people cast the appropriate vote (be that Trump for president, or ‘yes’ for Brexit).

Another parallel we take the liberty of making is that Mr Trump is – at least to our ears – an outspoken nationalist. America comes first. He doesn’t seem to tire of pointing that out. And why? Easy, America is the best country in the world to live in. Well, not yet. Only if President Donald Trump is elected. Then, he will get to work making America great again.

There is another thing that equates Mr Donald Trump to European populists; the ease with which he ridicules minorities. It is safe to say that he does not have the majority of any ethnic minority on his side, and we found it interesting that in this speech he decided to appeal to them. Even more interesting than this was the way in which he did it. “African Americans, you have no jobs, you have a horrible education, and oftentimes get shot just while walking down the street. So what do you have to lose? Vote for me!”

Uncle Sam Is Back

While we could go on and on about Trump and his speech, we think our point has been made. Donald Trump is a populist, and attempting to gain votes through ‘motivated reasoning’ by pushing the electorate’s emotional buttons. While we cannot say we were surprised by his speech (although it was a thoroughly unpleasant experience), what we were troubled by most was the crowd that had gathered to see him. Such fanatical support of a political figure cannot be a sign of a healthy democracy. The image of his supporters standing in the middle of the stadium, arms raised in front of them – this was in order to take photographs of him with their smartphones – cannot but remind one of the images of people saluting one of Europe’s most vile dictators. At the end of his speech, Trump points one finger at the cameras, and utters the words Make America Great Again! For us, this is 21st century Uncle Sam, recruiting for the war against democracy.

Click to find more by Elisa and Sabine on The Euroculturer.

Make sure to check back on November 7th for The Euroculturer’s Election Special! Sign up to our newsletter and never miss another story!

“What is an Erasmus Mundus Master’s Degree?” by Virginia Stuart-Taylor

If the news has you down, cheer up with our new satire- The Americorner with Ryan Minett! Join Ryan as he finds out how the EU plans to maintain its 28 member structure in the wake of the Brexit.