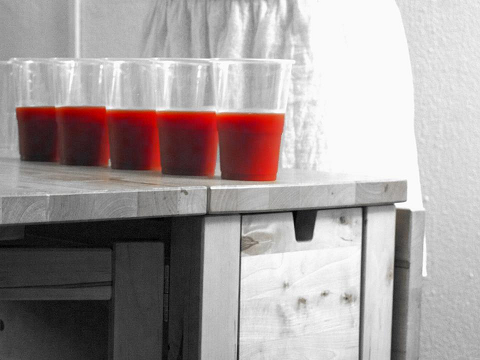 The night begins with an improvisation that mixed sax music, dance and visuals. Then, a small walk leads to a penthouse where “A mother”, monologue of Dario Fo and Franca Rame, takes place, leaving the audience in the room breathless; Juliette, a beautiful French dancer, warmly welcomes us at her house and suggests us to take a tour of her small penthouse in the neighborhood of Poble Sec. And then, she offers tomato juice and a homemade French quiche.

“Hello! Welcome! Please, come on in!” No, we are not friends of our host; we are entering at a private home to enjoy a performance.

In time of crisis and financial cuts that affect severely the cultural sector and in which, for example, emerged a movement of occupied theatres, a new artistic trend takes shape: performances in apartments. Recently, Barcelona, a city with a diverse cultural offer, has hosted two events of this kind: Hors Lits and BIOROOM. They both have this new idea of performing in common and enjoy a curious and appreciating audience, but they differ in other aspects.

Hors Lits  (Réseau d’Actes Artistiques), which literally means “out of the bed” in French, consists of four performances of twenty minutes each in four different apartments of a given neighborhood in one night. The idea is embedded in the will of breaking down the wall embodying intermediation: it remains a very simple and honest communication between the performer and the public, in any possible place, “even in your bed”. Hors Lits has its origins in France in 2005, when an Argentinian actor decided to react to the problem of not having a space where to perform. Since then, the project has expanded to several French cities and out of France as well: Montpellier, Toulouse, Bordeaux, Montreuil, Marseille, Paris, Rennes, Vevey, Saint Etienne, Beziers, Séte, and lastly Barcelona, Aix en Provence, and Bruxelles.It is so that “Colectivo Suelto”, namely two French girls, exported the event to Barcelona achieving resounded success and counting already two editions. The latter one had place in a mild night in November, accidentally a day of a general strike against financial cuts, 14th November 2012. The meeting point was a square in the neighborhood of Gracia. The action was repeated the next day with an awesome success.

Once everyone was gathered, we were directed to the first apartment. The night began with an improvisation that mixed sax music, dance and visuals. Then, a small walk led to a penthouse where “A mother”, monologue of Dario Fo and Franca Rame, took place, leaving the audience in the room breathless. Later on, an Italian man was already waiting in the next house to perform Pesto Cooking, and once the pesto flavor invaded the room, it delighted the audience with its taste, while moving towards the next apartment. The last appointment was the staging of a dream between reality and fantasy, lightness and uneasiness, talking frames and moving lampshades. Without noticing it, the route had already come to an end and it was time to say goodbye to all those journey mates of that special night. Hors Lits is getting bigger, as Nîmes and Nantes are joining the network this year. Montpellier will stage in “apartment” again on 27 and 28 March, and so will the Paris Region as well. Barcelona will host the event again in May. The official announcements are available on the website horslits.com/.

BIOROOM’s project started last year. It can be understood as a “perfomative experience of intimacy” and is strictly connected to a doctoral thesis on “the dramaturgy of reality in the contemporary scene”. So it goes around the theatre of intimacy and the theatre of reality and following the reflections of the historian Michelle Perrot, the house becomes a capsule to represent the city. In contrast to Hors Lits, BIOROOM staged four stories directed by four different directors. One of the stories was about Juliette…Juliette, a beautiful French dancer, warmly welcomed us at her house and suggested us to take a tour of her small penthouse in the neighborhood of Poble Sec. Once everyone was comfortably sitting on the sofa or had arranged him/herself on the floor, she offered tomato juice and a homemade French quiche. After that she began telling her personal story. She spoke of her childhood and her neurologic illness, consequence of isolation from the other children. Looking at her, it was hardly believable, due to her enthusiasm and social skills. The energy and the joy she expressed captivated her guests. The audience became personally involved through a series of philosophical questions and answers about life that were followed by an improvised dance session with Juliette. The last part of our night was a solo dance improvisation, in front of the wall projections of her family pictures. There we found out that her parents were part of the night audience.

The two experiences have different perspectives. They both offer an original approach to experience a space and a place where we do not normally experience a dance or a theater session, starting by discovering the atmosphere, and obliging us to go beyond the idea of an apartment and its rooms. Both proved that sharing food can play an important role by making people suddenly feel more comfortable, relaxed, and open. The main experience remains that fascinating feeling created by the situation of intimacy and cosiness. A place and a time for reflection, to taste a beverage offered by the host, to hear different stories, to be curious and discover new homes, to create more intimacy between the artists and the audience.

BIOROOM’s main objective is to build “an itinerant exhibition”, “an intimate map of the most important cities of the world”, believes Juan Hurraco, BIOROOM’s creator and curator. Thus, after the first edition in Barcelona, this year a second edition will be held in Buenos Aires. On the other hand, Berlin, Rio de Janeiro, and Santiago de Chile might get involved soon as well. Follow the next stories at bioroombarcelona.tumblr.com

Find out when Hors Lits and BIOROOM will perform in a city close to you and do not miss the chance to live this experience.

Bianca is Italian with Swiss roots. She studied BA Humanities for the study of Culture in Modena, Italy, and went on Erasmus to Malmö, Sweden. She is now enrolled in MA Euroculture , which she studied in the University of Groningen and the University of Strasbourg. She is currently doing an internship at Interarts, based in Barcelona, Spain, in the field of cultural project management and cultural policy. Her interests are anthropology, sociology, artistic and cultural life and institutions, cultural management and policy, and many more. She has the smallest feet a girl ever had.

5 thoughts on “Apartments become stages: a different way of performing and enjoying arts”