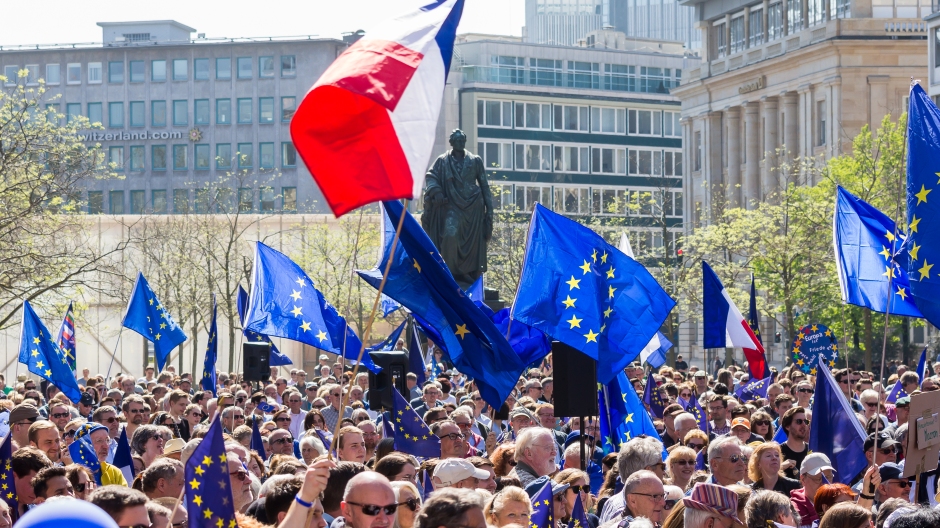 Around 150 students are holding up sheets of paper in blue, white, and red. Rester avec nous, they shout, stay with us. In the moment the camera clicks to shoot the French flag formed out of sheets of paper, the sun breaks through the clouds again. A good sign for Europe? Maybe. What is sure, is that the pulse of Europe now also beats in Groningen.

On a Sunday afternoon, on the second of April, 2017, the first Pulse of Europe event was held in Groningen. Pulse of Europe is a pro-European movement that has emerged in Frankfurt, Germany, around the end of last year. Against the backdrop of the Brexit referendum, the election of President Trump, and the rise of nationalist sentiments all across Europe, the initiators aim at raising awareness about the many advantages European integration has brought to European citizens. They have been organizing weekly events on Sunday afternoons, first only in Frankfurt, then in an increasing number of cities in Germany, now all over Europe. (see http://pulseofeurope.eu)

The first Pulse of Europe event in Groningen took place on the square in between the University of Groningen’s main building, and the University library. Blue and yellow balloons distinguish the pro-European character of the event. An estimated 150 people gather around the stand that offers free lemonade, and on the stairs of the Academiegebouw, the main building of the University of Groningen. Most of them are students, and they seem to be mainly internationals. The German percentage remains unspecified, but might rise up to 70 percent according to the author’s educated guess. Possibly unsurprising: several generations of Euroculturers are seen amongst the supporters as well.

The event starts off with the European anthem, Freude schöner Götterfunken. As expected, nobody knows the lyrics. But this is no problem, because of Jeremy’s enthusiasm. Jeremy, who is the organizer of this first Pulse of Europe event in Groningen, is genuinely happy about the number of people that have showed up. After only eight days of organization, the turnout is a remarkable success. Jeremy invites us all to hold short, three-minute-long speeches about our opinions and attitudes towards the EU. Although the open microphone had been announced beforehand, students are reluctant to take stage. Nevertheless, many important topics are brought up by the students daring to speak to the crowd: Europe as a peace project, borderless Europe, the EU as a refuge in times of globalization, Europe as a space for diversity and exchange rather than close-minded nationalism. A lot of praise for the EU indeed, but students are, after all, those who benefit most from European integration.

After a couple of speeches, the organizers hand out the sheets of paper in white, red and blue. The reference is clear: the flag serves as an appeal to the French citizens to make a clear statement for Europe, diversity, and collaboration, and not for Marine Le Pen’s chauvinistic nationalism, in the upcoming Presidential elections. The next Pulse of Europe Groningen-event is scheduled, of course, for April 23rd: the day of the French election. That time the event will take place on the Grote Markt, the central square in the Groningen city center. Can more people be attracted than only the students who directly benefit from the EU and its Erasmus program, or who are regular international students? Let’s hope so. After all, rester avec nous should nowadays be pronounced in all European languages.

Click here for more by Sabine Volk on The Euroculturer.

Click here for more European Politics on The Euroculturer.

Click here for more Cultural Issues on The Euroculturer.