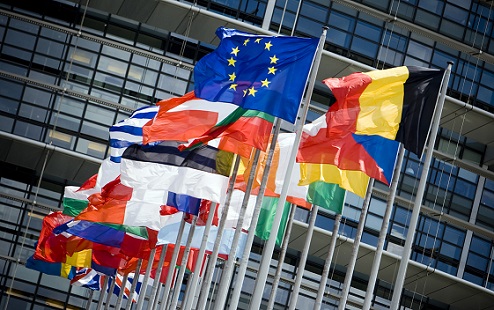 The press often portrays the European Union (EU) as a remote, almost foreign authority which makes decisions and forces them on its member states. As a consequence, it often fails to portray the power of the member states in the EU decision-making process.

In order to explore these notions in more detail, let’s go back in history.

The traumatic events that happened during World War II led Europeans to think about ways to prevent another war from breaking out.  This reflection resulted in the signing of the Treaty of Paris in 1951, establishing the European Coal and Steel Community (ESCS). Coal and steel are two major materials needed to build heavy armoury and therefore wage wars, so sharing those assets would theoretically block any intra-European wars. Political peace and its social benefits were to be achieved through economic partnership.

Nowadays, as the chemical attacks which recently took place in Syria prove, steel and coal seem outdated in the field of war.

In order to stay competitive and promote growth, the EU has gained decision-making power, and some laws are now taken at an  EU-level and then imposed on member states. This supranationalism is different from what happened when the ECSC was created. Most of the time the Community required unanimity from all member states – an intergovernmental method.

We are back to our focus: supranationalism and intergovernmentalism.

As a whole the EU is the largest economy in the world and it is a unique political organisation combining supranationalism and intergovernmentalism.

The European Parliament and the Council of the European Union are two of its supranational bodies. To put it simply, after a vote, the majority result wins and all member states have to implement the decisions that have been made.

On the other hand, this mechanism is pondered by some regulations applying intergovernmentalism in some fields such as: taxation, the accession of new states, and the common foreign and security policy. When it comes to those areas, unanimity is required and no one decision can be forced upon a state.

In order to make a partition between supranationalism and intergovernmentalism, the Treaty of Maastricht, signed in 1992, introduced the principle of subsidiarity.

This principle states that the EU can only take actions when it is most relevant for it to do so. Thus, each time when discussing a new regulation the EU must prove that this decision would be more effective if taken at the EU-level than at a national level (and by doing so, the EU dismisses any claim that it would take decisions for instance only for the UK, France or Italy).

Yet, this does not happen without any problems. When it comes to energy, even though joining our forces seems sensible because it makes the EU more competitive, therefore leading to growth and the creation of jobs in the long term the case of Germany and the Netherlands have recently shown the negative short- and medium-term effects of such strategies.  Recently, Germany overproduced electricity and exported massively to the Netherlands where, as a consequence, some energy producers became obsolete and had to lay off some workers because they could not afford to pay them anymore.

The economic aims of the EU have overpowered its political and social ones, but this situation is more complex than it seems. Economic achievements go hand in hand with social development, and in a globalised world social benefits are still acquired through economic growth.

It is therefore wise to ask yourself: Should the EU as a whole be more efficient by gaining more power (supranationalism) or should each country’s interests come before the EU’s even though this could reduce this country’s influence in a globalised world?

“Are globalisation and the EU flattening our differences and turning us into relatively similar human beings?”

This will surely lead you to wonder: Are globalisation and the EU flattening our differences and turning us into relatively similar human beings thus losing our diverse cultures and traditions?

What is Globalization? Global Europe Explained by Daniele Carminati

What does Trump mean for the European Union? Looking at the reality of a Trump Presidency from the perspective of the EU by Eoghan Mark Hughes

One thought on “Introducing the European Union: Between Supranationalism and Intergovernmentalism”