“A true story about fortune cookies: they look Chinese, they sound Chinese, but they’re actually an American invention, which is why they’re hollow, full of lies and leave a bad taste in the mouth.”

This is a quote from Mandarin in the opening of Iron Man 3, the final episode of Iron Man trilogy movie series.

Mandarin is a notable figure in Iron Man, both the comic and the movie versions. He was first created in 1964 in the Tales of Suspense as the ultimate rival of Tony Stark (Iron Man). Since Mandarin has been created for over 40 years already, the description of the transformation of Mandarin could be a far-ﬂung journey. Instead of biting off more than it can chew, this article simply aims to compare the two different Mandarins from 1964 Marvel Comic to 2013 movie figure. I note here that Mandarin refers not only to the actual figure in Iron Man, but may also refer to the Bureaucrat which represents China, as well as the Chinese language and culture; to avoid confusion, I refer Mandarin hereon to the Marvel figure only, not the others.

Who is Mandarin? Mandarin as a fiction character is described to have been born around 1920 in China. His father was a Mongolian nobleman descended from Genghis Khan[1], and his mother was an English aristocrat[2]. Raised by his embittered aunt after his parents’ death, he became an important member of the Kuomintang Party before the Communist’s rule over China in 1949. Throughout his own discovery of mysterious power, he found a wreckage of a starship of the reptilian Kakaranatharian, or Makluan, extra-terrestrial race; there he found 10 rings with mysterious powers. Aimed to conquer the whole of China, and then the whole world, Mandarin set his base in China, and later also in Hong Kong. With his teleport technology derived from the Kakaranatharian spaceship, he could travel anywhere anytime. Mandarin also engaged in conflicts with other Marvel figures[3].

In the original Marvel comic, Mandarin never regarded himself as a terrorist or a teacher as he was described in the 2013 movie. Although one may find some resemblances of Mandarin with earlier evil Chinese figures found in western culture, namely Fu Manchu and Yellow Claw: long moustache, chinky eyes, and quasi-oriental outfit, Mandarin can be perceived very differently in many ways when compared with the previous Chinese villains. In fact, although according to Marvel’s official information Mandarin holds Chinese citizenship; he was never meant to be an equivalent to Fu Manchu or Yellow Claw; nevertheless, he is partially Chinese, therefore it should not be overlooked that Mandarin’s half Chinese half British origin gives great space of alteration of the character.

What we find in Iron Man 3, however, is a completely different Mandarin.

Played by the Oscar-winning British actor Ben Kingsley, Mandarin is no longer the superpower evil which may control over almost everything. Yes, he was wearing 10 rings, but is without any superpower at all. To be more precise, he was just a puppet, a puppet of the real villain, Aldrich Killian. With sunglasses, Kingsley’s Mandarin looks more like a hip-hop star rather than a Chinese villain. In other words, the 2013 Mandarin shows almost no resemblances to Chinese at all.

The dilemma here I find on identifying Mandarin, or attempting to identify who Mandarin really is, is that, Mandarin is half British and half Chinese, which means Mandarin could be both ‘Western’ and ‘Orient’ at the same time. Thus, the proportion of ‘Chineseness’ or ‘Britishness’ may vary.

As I mentioned earlier, both Mandarins represent an evil figure from the Orient. Thus, the question is where exactly is the Orient? I reckon that the meaning of Orient changes when Mandarin himself changes. Considering the fact that the USA was engaged in wars during the time where both Mandarins were created. The first Mandarin was created in the 60s during the war with Vietnam. The latter was created in the early 21st century during the wars in the Middle East. One can see how Mandarin transformed from a Far-East villain to a Middle East villain. This can be proven by the changes in Mandarin’s ten rings: 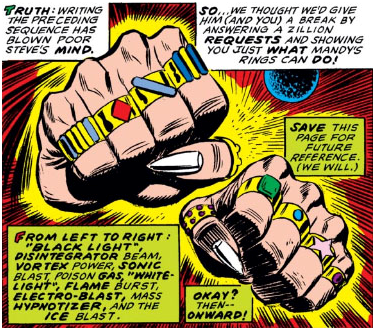 Ten Rings to which Mandarin and all other evils in the Iron Man 1-3 movies are connected to. The Ten Rings group is based in Afghanistan, and led by Mandarin[7]. The organization’s flag, symbol, as well as the dress code of its terrorist, are all highly associated with the Middle East:

As I could see from the Iron Man movies, Mandarin’s magical ten rings were transformed into a terrorist group, Ten Rings, where all members wear one of the ten rings as a symbol. And here’s where the point of attention shifts: from Mandarin as an important figure to a terrorist group, the Ten Rings organization. In other words, Mandarin’s evil standing in the movie is strongly weakened.

And here’s something else.

More than the shift of focus and thus the ‘weakened’ Mandarin, the over-stretching ‘Orientalness’ in Mandarin’s character also gives fuel for further discussions. I consider the invention and reinvention of Mandarin as a reflection of the changing villain who Iron Man has been fighting against, hence, the evil ‘Others’. Both the 1964 Mandarin and the 2013 Mandarin show a lot of ambiguities. Yet, as I have demonstrated, despite the shift of characteristics in Mandarin himself, Mandarin was, at least partially, Chinese.

The perception of Iron Man 3 in China, especially by the Chinese audience, is therefore highly worthy of attention. To avoid the film from being banned by Chinese film authority, the name of Mandarin was changed to Man Daren (滿大人); the term Mandarin bears heavy association with Chinese ethnicity, whereas Man Daren does not. ‘Man’ is a very uncommon family name in China, and ‘Daren’ refers to a senior male. Such efforts in minimizing the Chineseness of Mandarin in the Chinese market, is done to avoid the racist connotation regarding this Chinese figure, regardless if he is evil or not[10]. More than that, in order to suit the huge market of Chinese audience, Iron Man 3 has a 4-minute-longer version tailor-made for Chinese audience, featuring famous Chinese actor and actress together with the Hollywood cast[11]. As a result, the opening box office in China made a record-high 21 million US dollars[12]. But what may be more profitable than the box office: both the original and Chinese version of Iron Man 3 embedded various Chinese brands into the movie for commercial promotions[13]. The slight awkwardness of embedding Chinese movie stars and brands with Hollywood cast in the 4-minute-longer Chinese versions was not very well received among all the Chinese audience[14]. However the effort of minimizing Mandarin’s Chineseness seems to have paid off, the overall perception of Iron Man, as well as Mandarin was mainly positive on the Chinese market.

When Mandarin first appeared in the Marvel comic in 1964, the USA was experiencing fierce civil right movements. On 11 June 1963, President John F. Kennedy addressed the nation on the milestone Civil Rights Act, and later in 1964, the Act was enacted on 2 July; the African-American civil rights leader Martin Luther King was awarded the Nobel Peace Prize the same year. One may thus argue that Mandarin could be regarded as a more ethnic-conscious figure under the tide of the civil rights movements. I noted previously that during the 1950s and the 1960s, the USA was in military conflict with communist regimes in Korea and Vietnam, where China also dispatched military interventions against the USA. One may thus assume that there might be parallel between staging Mandarin as an Oriental villain and actual Oriental enemies of the USA to that time.

Like Mandarin, China has undergone significant changes since the 1960s, and is now considered an important economic and political partner of the USA. My article serves only a glance of the transformation of Mandarin; the invention and reinvention of the character. Yet, despite all the differences, one may still find considerable ambiguities in both the old and new Mandarin. One shouldalso not forget, that Mandarin, or Man Daren, was, and still is, partly Chinese. Yet how the Western audience sees Mandarin, and how the Eastern sees Man Daren, could be something quite different.

[3] For a full-biography of Mandarin, please refer to ‘Mandarin’, Marvel Universe Wiki, http://marvel.com/universe/Mandarin

[6]  Picture from ‘Could Use A Nail Trimmer’, The Powerless Power of Comics, http://peerlesspower.blogspot.de/2013/05/could-use-nail-trimmer.html

[9] Picture from ‘How does the Mandarin fit into Iron Man 2?’, Comic Book Movie, http://www.comicbookmovie.com/fansites/Poniverse/news/?a=15697

Wong Tsz, from Hong Kong, moved to Europe for MA Euroculture (2010-12) after obtaining his BA in Language and Translation. Currently, he’s a PhD student in Musicology under DFG Research Group ‘Expert Cultures from the 12th to the 16th Century’. Wong Tsz played in various orchestras in Hong Kong and in Europe, including the Hong Kong Youth Symphony Orchestra, Open University of Hong Kong Orchestra, Göttingen University Orchestra, Groningen Students’ Orchestra MIRA, and currently in Academic Orchestra Göttingen AOV. He’s not only keen on playing music but is actively engaged in academic research. His Master’s thesis gives an in-depth study of Gustav Mahler’s Das Lied von der Erde under the scope of Orientalism theory by Edward Said. His current PhD project ‘Matteo Ricci in East West Music Exchange’ gives a detailed analysis to trace the early models of music exchange between China and Europe in 16th century.