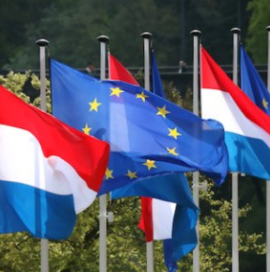 If as an MA Euroculture student you are interested in European affairs, there is no better place to do your internship than a European institution. This is why I was so happy when I was told that I had been selected as a trainee at the European Commission in Luxembourg.

The Directorate General (DG) I applied to was Translation, as I believed my chances were greater given my previous academic and professional experience. I admit that at first I had certain reservations about doing translation work for my traineeship but as I had always wanted to go to Luxembourg and this was a paid traineeship (something which is hard to come across nowadays), I confirmed almost immediately.

Soon after that I was contacted by the Commission’s Traineeships Office and they emailed me more practical information about the Grand Duchy of Luxembourg and a list of approved accommodation offers. Finding housing in Luxembourg City (with a total population of 100,000) can only be compared to the nightmare-ish experience of looking for accommodation in Uppsala (Uppsala students know what I am talking about). To illustrate this with an example, almost a quarter of the DG Translation trainees in Luxembourg are commuters and some even live ‘abroad’ – i.e. in Germany or France. This is the time to thank the EU for making it all possible and bringing down the borders!

To begin with the workload – we started by doing trainings and getting to know the translation software and soon after, we were thrown in at the deep end. Each one of us was assigned a mentor – an official who supervises your work and helps you if you have any questions. I was very lucky with my mentor as she is very kind, helpful and easy-going, and we have gone out for beers a couple of times. Trainees generally translate 4-5 pages per day (an official usually translates 7-8, even up to 10 pages) and we are not allowed to stay overtime although it is sometimes necessary (a regular working day is 7.5 hours). Working at DG Translation means that the people from your department are all (or almost all) from your country. So here, as I am Bulgarian, I speak more Bulgarian than I initially expected. Something that I find very interesting is how cultural differences are reflected in the way other language departments work. For example, the Scandinavian language departments generally start work earlier than the rest (and so they also leave earlier), the Italians always start their day with coffee in the cafeteria, and the English department, being irreparable traditionalists, use the same method of assigning work to translators as they did in the early days of the UK’s accession.

There are a lot of legal texts for translation – Commission Decisions, Regulations, Amendments, Directives – but I also translate press releases (where you really have to let your creative journalistic-thought fly) and even letters sent by EU citizens, as each citizen has the right to address the Commission in any of the 23 official languages of the EU. At first sight translation work might seem dull, especially to those who have never dealt with it professionally (or academically). However, as the big Bulgarian poet and translator Atanas Dalchev once said, “translation is the most careful form of reading”. While translating you really get into the way the Commission works and you also see how the EU affects citizens personally. It brings to life a lot of the theory we were taught in different Euroculture classes.

Life with the trainees is loads of fun. Our mailboxes at work are full of emails about different events, parties, or just chit-chat, and we often call our office telephone lines. For me a good indicator that you are enjoying your job is when time flies at work. And this is what it feels like for me every day.

Before coming to Luxembourg I had heard stories (even from Luxembourgers) that it was a boring country and nothing much happened there. After having spent about two months here, I can confirm this is definitely not true. Perhaps because of the fact that almost 40% of its population are foreigners, and there are always so many young trainees not only from the Commission, but also the European Parliament, Court of Auditors, or an international bank (this place is flooded with banks), there is always something going on. I think one of the advantages of living in such a small city is that there is no way you can go out or enter a bar and not meet someone you know. Plus, being only 60 trainees at the Commission in Luxembourg (compared to almost 600 in Brussels) we have become a close-knit group and we have got to know each other a lot better.

So come on down to Luxembourg – the Erasmus city for trainees – and enjoy one of the smallest, safest, richest and most multicultural countries in Europe.

Rumen Halachev, Luxembourg Correspondent
Rumen is Bulgarian and completed his BA in English Philology at Plovdiv University in Bulgaria. He is currently enrolled in MA Euroculture, at his home university, Uppsala University, and his host university, the University of Strasbourg. He is doing his third-semester internship in Luxembourg at the European Commission. Rumen is interested in the fields of EU affairs, translation, (euro)culture and languages.

6 thoughts on “The European Commission and my Luxembourgish(!) Experience”