Kraków, Poland. What is the first thing that comes into your mind when hearing this? Well for me, as a German, it definitely painted a different picture from what I actually experienced while spending my second semester of the MA Euroculture programme there. Starting with the architecture, I expected to see heavy influence from the Communist era that dominated Poland for over 40 years. But instead I found myself surrounded by numerous old and beautiful buildings that reminded me more of being in Italy or Belgium rather than Ukraine or Russia. This is due to a unique fact that makes up a huge part of Kraków’s identity until now: Kraków is the city of culture in Poland and its architecture symbolizes a highly rich cultural life with all the influences that shaped the country for decades. My point here is that despite of all my expectations, Kraków is one of the most beautiful European cities that I have ever been able to see. 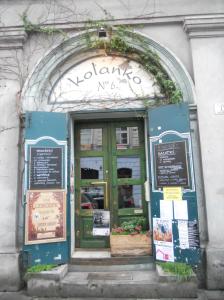 Now every time you go abroad, it is my opinion that the people you meet there are of immense significance. People can turn the ugliest place (which, as was just explained, Kraków is not) into the most delightful experience if you get along with them and have fun. For example: the Euroculture staff in Kraków. Not just the professors but, more importantly, all of the Euroculture coordinators are very much engaged in their work and are 100% there to help you find your way around academically and in Kraków itself. I have hardly met anyone at any university I studied at in the past so committed and so open to your ideas and comments. They have a high degree of expertise in what they do so you can definitely learn from them and yet you can go out and have a drink with them or a coffee in our beloved “Karma” café (the first thing they introduced us to). Sometimes they even offer the notorious ‘Vodka lecture’ that no-one can ever leave sober even if you try really hard!

Encounters with local Polish students, however, were unfortunately limited to the annual students’ week where you can attend free concerts or the final march through the town trying to keep a drink in your hand without the police noticing (public drinking is forbidden in Poland). The lack of encounters may be due to the amount of work you have to do in Kraków, resulting from living in a ‘Euroculture bubble’, or it may be also partly due to the Polish students not all seeming to want to get involved with foreign students in the first place. This leads me to my quite honest but general impression of Polish people. Polish people, I have to admit, are still a little bit of a mystery to me. Not being able to speak Polish fluently (despite taking a Polish for Beginners course) is obviously a main factor in this. My experiences ranged from the cashier in the supermarket not even answering your long and painfully practiced “Dzień dobry” or no smile in some people’s faces, not even the slightest hint, to a total stranger walking through downtown Kraków with you for 20 minutes (therefore missing his bus home) just to try to help you find a newly-opened bar. It seems to be a matter of age and former experiences with foreigners that makes the Polish either seem dismissive or warmly welcoming to you.

Whatever it is, however, it should not stop you from visiting such an interesting and exciting European city that has so much to offer on a lifestyle level, both historically and culturally. Choosing Kraków as my Euroculture host university has truly been a great contribution to my understanding of European history, culture, and what makes Europeans feel European. Poland, to me, is one of the countries where you can see how such a feeling is evolving first hand and how entering the European Union changes people’s lives and perspectives, and it would not take me a blink of an eye to decide to go back there again.

Mimi is from Germany and studied BA Translation. She spent her first semester of MA Euroculture at the University of Göttingen, her second semester at Jagiellonian University, Kraków, and is currently doing her internship at a cultural foundation. She is interested in the role of culture and how it can be used to further integrate Europe. Mimi’s real name is Miriam (which she kind of dislikes) and she loves to watch His Dudeness in the film The Big Lebowski.