Europe is at a crossroads and the coming months will determine its stability for the foreseeable future. The unforeseen victories for Brexit, Donald Trump and the rise in populism makes us question how there is such momentum behind these campaigns. Therefore, the leaders who have grabbed headlines over the two years must be examined in order to understand how they have shaken the world.

“Post-truth” was awarded by Oxford Dictionary as the word of the year. Defined as “appeals to emotion disconnected from the details of policy, and by the repeated assertion of talking points to which factual rebuttals are ignored”, it has led to escalation of support for populist leaders and a growing support of their beliefs. With anti-migrant and anti-Muslim sentiment rising in Europe, there is an obvious shift in mentality as opposed to previous years, which mainly rests on the shoulders of the post-truth rhetoric. Various populist campaigns stemmed from post-truth and used emotion to escalate fear and incite hatred in various nations. Donald Trump’s stinging remarks about Mexicans and Muslims have been accompanied by a spike in hate crimes post-election, likewise in post-Brexit Britain. The leaders rely on fear and stirring emotion, rather than sense or logic, in order to gain a large following. In a pre-Brexit world, no one would have given Farage a chance, or have thought that Trump would claim the victory across the pond, nor that Le Pen may have influence in the French Presidential election.  However, the Brexit campaign spurred Trump to follow the same rhetoric and yielded a similar result. Post-truth tactics and hate rhetoric have grabbed Europe by the throat and won’t let go, so much so that talk of the demise of the European Union has begun to bubble up in public discourse. 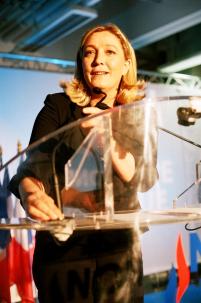 Throughout Europe, there is a growing urgency to discard the base of what has been guiding the political norm for the last decades. Moderate politics has typically dominated politics but we are witnessing a change in European sentiment. As elections in France, Germany and The Netherlands loom, Europe’s future could potentially be vastly different within a year. Marine Le Pen is making noise in France with a rhetoric that highlights the use of post-truth in politics, with much focus on the fear that a foreign ‘other’ will steal your job and earn more than you. This kind of rhetoric is hardly new, but as of late it has begun to feature more prominently in political discourse. Just last week, Geert Wilders was once again convicted of hate speech and also wants to ban all mosques in the Netherlands, is leading the most popular party in the country. He also relies on the tactic of post-truth and the manipulation of citizens’ emotions to gain popularity, rather than on logic and clear policy goals. Before the recent rerun of the Austrian Presidential election, a Holocaust survivor spoke out and pleaded with the public not to vote for the far-right candidate, Norbert Hofer, because the consequences petrified her and reminded her of pre-World War II Austria. This is a clear signal that surely it is time to think about which direction current politics is taking.

Nigel Farage’s Brexit quoted as a stand up against the establishment and Donald Trump being carried as the ideal ‘anti-establishment’ candidate in the U.S. election. But for me it is difficult to confirm that they are truly ‘anti-establishment’. Trump resides in a Manhattan apartment “decorated in 24K gold and marble” and has a net worth of 3.2 billion dollars. It is hard to imagine why people labelled him anti-establishment despite having more in common with Hillary Clinton than many people would like to think. Prior to the election, he rubbed shoulders with the Clintons, their daughters are friends, and he had even donated money to the Clinton Foundation and to the Democratic Congressional Campaign Committee. It would be foolish to think that Trump is anything but the ‘established’. Moreover, Nigel Farage who officially resigned as UKIP leader, but still receives 84,000 pounds salary as an MEP, immediately denied the NHS their supposedly ‘guaranteed’ 350 million pounds after the Brexit result. Since the Brexit campaign, he has stuck to Trump, like a remora fish on a shark. Pictures recently circulated of him at one of Trump’s parties in London. How are these men seen as anti-establishment since they reap so much from the establishment? Granted, there is disenchantment with politics, but those leading the opposition do not know more than those already in government. One just has to look at Farage’s disappearance act or Boris Johnson’s reaction post-Brexit. Just this week, a Tory aide was photographed with a notepad with Brexit plans which included “What’s the model? Have cake and eat it”.

However, maybe not all is lost. In the recent Austrian Presidential election, the Green Party won the vote by a bigger margin than the original election in May. Moreover, in the Richmond Park by-election in London, the Lib Dem candidate unseated the Tory, Zac Goldsmith. This may just be a symbolic victory for the left, yet, it may be the penny dropping in people’s minds that unity and harmony will undoubtedly be more beneficial than discord. However, with papers and polls indicating that populism is here to stay, the more centred people must surely find a way to stop the post-truth tactic and potential destabilization and disintegration of the European Union.

Ben recently graduated from Leiden University with a masters’ degree in International Relations. From Ireland, Ben graduated from University College Cork with a BA in Spanish and History and is currently interning in The Hague.

“Can the Roma Speak? Roma in the UK in the aftermath of Brexit” by Sohini Rajiyung

“And Then There Was One: Angela Merkel and the 2017 German Elections” by Lauren Rogers