In a time of global pandemic where a global war is fought against the newest form of coronavirus, another battle regarding information and its usage is at stake. Conspiracy theories and controversial figures flourish throughout the internet and other media, contributing to the overall chaotic situation and possibly serving the interests of some people. This interest of mine for disinformation in time of a pandemic started about a month ago when a classmate sent on a WhatsApp group a message the following information: “According to a friend, a leak from the official Czech government has revealed that when 1,000 cases of coronavirus will be reported in the country, tighter restrictions will be imposed. If you are a smart person you should rush to supermarkets to gather food.” This rumour was proven false in the days that followed, yet this message managed to trigger some fear and added to the overall uncomfortable situation of being a stranger in a country whose culture you’re not completely familiar with. END_OF_DOCUMENT_TOKEN_TO_BE_REPLACED 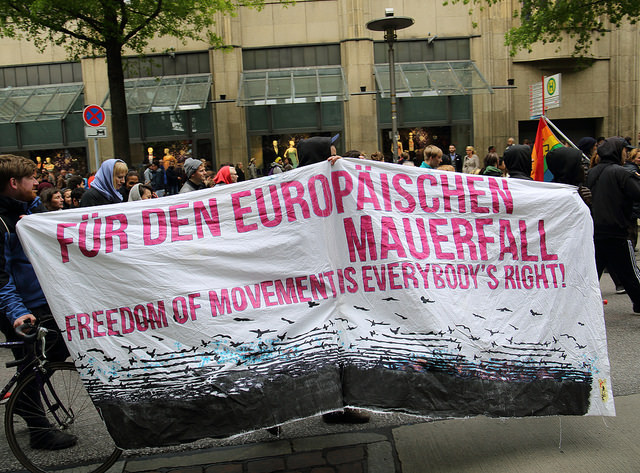 This is the second part of the interview with Michael Hindley. You can read the first part here. In this part, the interview focuses on the border issue between Northern Ireland and the Republic of Ireland following Brexit, but also on Trump, Ukraine, Germany…
We would like to thank Michael Hindley for his time and his insightful answers.
You can also follow him on Twitter and watch his video about Brexit.

B: Moving a bit to the left on the map, let’s talk about Northern Ireland, which also has a feeling of sometimes not being part of the UK at all. But because of the Brexit, is there any chance of another “trouble times” happening again?
H: This often comes up in the present debate on Brexit. I think sometimes it is inaccurate or somewhat hysterical. People on both sides of the border agree that being in the EU certainly helped the Irish/Irish dialogue. Both “Irelands” in the EU helped. There is no question about that. Also, to some degree the EU has guaranteed the peace process. The fact that there was no border helped. If it becomes a “harder border”, I think it is false to assume that it would simply go back to hostilities. Sinn Féin long ago bravely disbanded its link with the IRA [Irish Republican Army]. It is a constitutional left-centre party enjoying shared government in Northern Ireland and has members in the Republic [of Ireland]. So the Party of freeing Ireland by the “ballot and the bullet” has become constitutional. Martin McGuinness (1950-2017) was an active member of the IRA and subsequently shared power with Ian Paisley the leader of the Democratic Unionist Party in the Northern Ireland Assembly. Very difficult if not impossible to go back to the dark days of the “Troubles”. END_OF_DOCUMENT_TOKEN_TO_BE_REPLACED

After a cold and rainy winter in Southern Brazil, springtime has already come with some sunny but not so shiny weeks. As time runs towards the national election on October 7th, a land worldwide known for its clear sky and spectacular shores seems to be a bit cloudier and darker than usual. The feeling may come from the fact that things will remain the same for the next hundred years: stagnant, conservative, late, backwards and with its best minds leaving it behind. Is there anything worse than that? Well, maybe yes.
Democratic since 1985 and with direct elections since 1989, Brazil now faces a campaign full of hate. Violence has dropped off from the internet directly into the streets. Almost a month ago the right-wing candidate Jair Bolsonaro (PSL) was stabbed while campaigning in the midst of a crowd in Juiz de Fora, Minas Gerais, Southeast.

On March this year, violent mood was already in the air, when a bus transporting voters of the then candidate of centre-left-wing Luiz Inácio Lula da Silva (PT, Workers’ Party, former president from 2003 to 2010, sentenced to jail for corruption and thus forbidden to run under Brazilian law) was shot twice in the state of Paraná, in the South, without injuries.
The first impression is that all that hate speech that people used to flow freely on social media now has poured into reality. And that is not only worrying: it actually is a very frightening development to observe. END_OF_DOCUMENT_TOKEN_TO_BE_REPLACED

Germany has just experienced one of the most turbulent general elections in recent history. Merkel has gained another 4-year term; for the first time since WWII, a far-right party, the AfD, has made its way into the German parliament; and a three-party coalition seems inevitable. But what else can we tell from this election?

As it stands, no party wishes to cooperate with the AfD, and die Linke is a traditionally difficult ally due to its uneasy past regarding the East German Stasi (Staatssicherheitsdienst, SSD). Since the SPD vows to withdraw from the grand coalition that it has formed with the CDU since 2013, the only feasible possibility is the CDU-Greens-FDP coalition – also known as the ‘Jamaica’ coalition, named after the three colours. Although coalition government is not something new for the German politics, a three-party coalition is still not commonly seen in the German parliament. END_OF_DOCUMENT_TOKEN_TO_BE_REPLACED