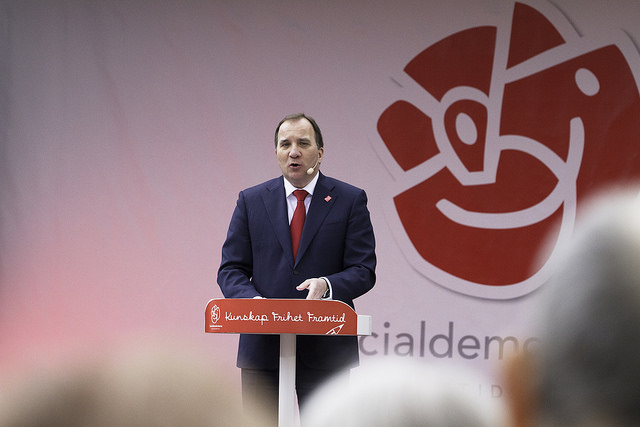 Freshly arrived in Uppsala, my mind filled with the idealized Swedish role model, it is with great surprise that I learn that Sweden is now facing the rise of populism and Euroscepticism. Rumours has been the situation in Sweden was slowly decaying but I had not realized the extent this phenomenon had taken in this country often considered as the peace haven of Europe, until I arrived and witnessed the tensions surrounding the legislative elections. After France and the Front National, the UK and UKIP, Austria and the Freedom party of Austria, Italy and the Five Star Movement, it is now Sweden’s turn to deal with Jimmie Åkesson and the Sweden Democrats party. Indeed, the Swedish elections that occurred on the September 9 has for the first time seen the everlasting left-wing Social Democrats party’s monopoly on the government endangered by nationalism and anti-immigration ideologies.
The country has gradually seen the rise of populism ever since the beginning of the 2000’s, following the first arrivals of asylum seekers coming from Iraq. From then, the number of asylum seekers has constantly increased up until 2015 when it reached its peak with 162,877 asylum seekers[i] entering the kingdom, before the government changed the immigration procedure, making it tougher. Sweden, almost unharmed by the 2008 economic crisis, remained prosper and did not seem to be the most fertile environment for such a breakthrough from the nationalist factions.

To have a better understanding of the current political landscape and the point of view of a Swede on this situation, I had an interview with our teacher Lars Löfquist, doctor in Theology, director of studies in Uppsala for the Euroculture programme as well as two other programmes concerning Humanitarian Action. Starting from this, I was able to draw some observations that could explain how Sweden got to this point, what is the current situation and what is to expect in the coming weeks. END_OF_DOCUMENT_TOKEN_TO_BE_REPLACED