Last January (2019) I had the opportunity to get in contact with the European Women’s Lobby in Brussels. There, I discussed the current situation of women’s right in the European Union, focusing on sexual and reproductive health and rights (SRHR).
The EWL, which is the biggest European network of women’s associations, aims at influencing the general public and the EU decision-makers in support of women’s human rights. It is continuously working to ensure every woman’s dignity and the respect of SRHR in the Union.
Here are some reflections following my contact with them.

Looking back at the events and debates that occurred across Europe in 2018, we are likely to notice that, on some issues, the European puzzle is rapidly falling apart. For several decades, the different puzzle pieces have been struggling to get closer through a long and demanding process of integration, but recently many of them have started to outdistance and even to crumble. Brexit was just the most evident expression of breach and disagreement, yet the EU appears quite fragmented also in other domains, including women’s rights – and especially SRHR.

Gender-based violence, surrogacy, pornography, abortion – the facets of SRHR are numerous and intricate and thus require a deep analysis. This article will concentrate on violence against women and right to abortion in Europe, as these topics have been in the limelight during the past year and have caused great disagreement among the member states, contributing to the breakdown of the puzzle.

First of all, it is important to recall the strong commitment of the EU to women’s rights. The Treaty on the European Union (TEU) upholds the principle of gender equality and non-discrimination (Article 2), whereas the Treaty on the Functioning of the European Union (TFEU) confirms the political commitment of member states to fight against all forms of domestic violence (Declaration 19 on Article 8). The Charter of Fundamental Rights warrants people’s right to dignity (Title I) and equality (Title III) and includes specific provisions on people’s right to physical and mental integrity, outlawing any form of discrimination on the grounds of sex.
These (founding) documents present concepts and positions in a dreamlike manner – but do the reality of the EU and the actions of its decision-makers correspond to them? END_OF_DOCUMENT_TOKEN_TO_BE_REPLACED 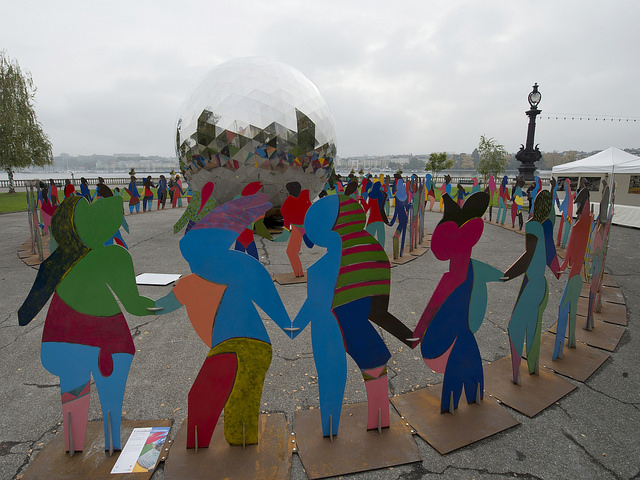 Today, on December 10, 2018, the Universal Declaration of Human Rights celebrates its 70th anniversary. After seven decades and many achievements, it is certainly important to honour the document which became a major milestone for the history of human rights and is now regarded as a yardstick by all nations. However, it is also necessary to highlight that the UDHR is not all black and white, as well as the declarations it inspired, like for example the European Convention on Human Rights (1953) or the Charter of Fundamental Rights in the European Union (2009).
All these papers, their articles and their words demonstrate the states’ commitment to the protection of human rights but, despite this, it is clear that today, nations and the institutions created to protect those rights are often failing. A simple example? Even if the three above-mentioned declarations prohibit slavery, servitude, forced labor and the trafficking of human beings, all these can still be found in many countries around the world and around Europe[1].

The practical failure in the protection of human rights is now of great concern especially in Europe, where these rights are some of the main principles on which the European Union was built. Recent events have questioned the willingness of Europeans to actually support other people to be able to enjoy their same human rights and have shown the difficulties the EU encounters in guaranteeing the fruition of these rights to its citizens, thus challenging the accomplishment of the entire European project.
But flaws do not only concern the practical protection of human rights. Considering the theoretical aspect, there are several obstacles in the understanding and consequent application of the UDHR. END_OF_DOCUMENT_TOKEN_TO_BE_REPLACED

However, this is not a positive signal meaning that the Italian and European migration policies are giving the expected results. In fact, 19% of those who have tried to leave Africa last September died or went missing, a percentage that has never been registered before[2]. Past scenarios in which the island, with its 6,000 Lampedusani, was hosting 10,000 people on its small territory[3] are not likely to happen again. Lampedusa is not facing any serious problem in welcoming and hosting migrants in its hotspot, where their process for seeking international protection starts and where they normally spend just two days before being transferred to the mainland.
However, the migratory phenomenon is still profoundly affecting Lampedusa and those who live there. Different people and places around the isle can show what living on an island on the European border means, with all its peculiarities and paradoxes. END_OF_DOCUMENT_TOKEN_TO_BE_REPLACED

An insight from the Italian powder keg

If migration has continuously been in the spotlight since the beginning of the refugee crisis, it is only during the past few months that Italy has really hit the headlines of European newspapers, despite having been one of the main doors to Europe for several decades.

It is no coincidence that this persistent interest for in Italian migration policies has been renewed since Interior Minister Matteo Salvini took office last June [2018]. His decision to shut ports to rescue boats carrying migrants has been hardly discussed and criticised, as well as his attacks to Maltese authorities and European leaders, accused of leaving Italy alone in front of the continuous arrivals of migrants that apparently no Italian government has never concretely tackled before.
Salvini’s determined response to the problem of illegal migration might seem very harsh and cold-hearted – and it actually is. But what Salvini is efficiently doing is simply making good on the promises made during the last electoral campaign. Being the leader of the right-wing and anti-immigrant party “League” (Lega, in Italian), it is no surprise that one of his most urgent goals is halting the flow of migrants into the country.
Actually, this is not only an Italian priority. Hungary has built a double layer barrier stretching for 155 kilometres along the Serbian border. France has rejected migrants at its border with Italy. Spain has built fences around the Moroccan cities of Ceuta and Melilla. Greece is at the core of the EU deal for the readmission of migrants coming from Turkey. Obviously, European countries have done their best to stop the arrival of migrants, but apparently more can be done – for example the EU could follow Trump’s advice and erect a wall across the Sahara Desert. END_OF_DOCUMENT_TOKEN_TO_BE_REPLACED