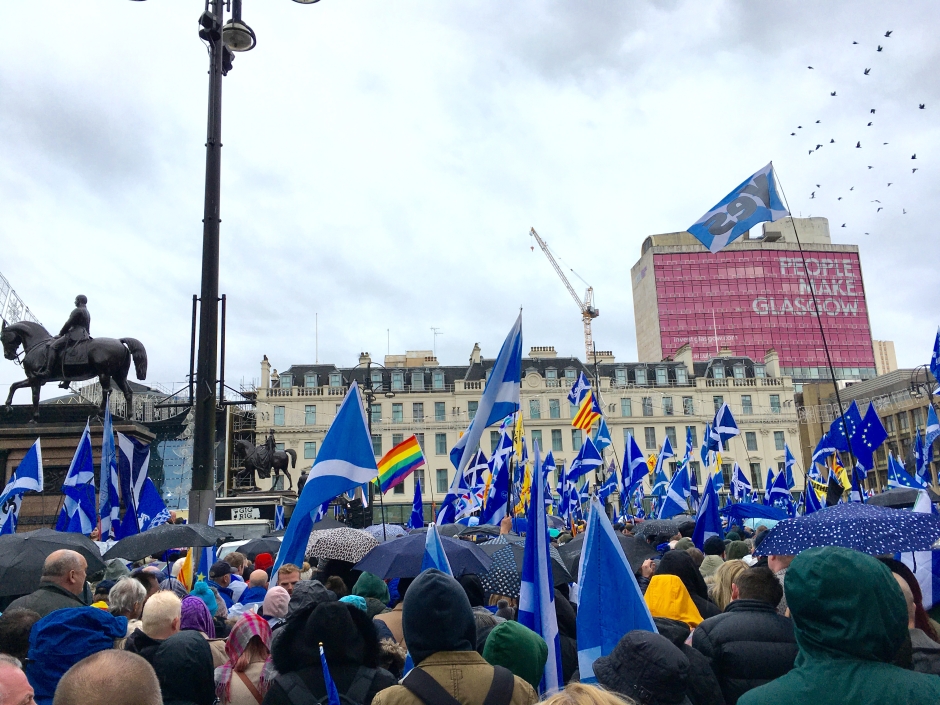 Six years after a referendum which tore the country in two, support for Scottish independence could be at its strongest yet.

The Scottish public is, quite frankly, exhausted. The 2014 referendum on whether the country wanted to become independent from the United Kingdom invoked a highly polarising effect among the people of Scotland, with a result of 55% in favour and 45% against.[1] Throughout the months leading up to the vote, the debate became so emotionally charged that one had to avoid the topic entirely in conversations with friends and co-workers.

Retrospectively, the Yes campaign was a messy one. An exaggerated nationalist discourse and Braveheart-themed memes dominated social media, while a lack of clarity regarding issues such as the future currency further weakened the independence movement’s credibility.[2] Later speculation about the potential involvement of Russia in endorsing the Yes campaign lead to further controversy. Despite all of this, the pro-independence Scottish National Party was re-elected just months after the referendum, headed by new party leader Nicola Sturgeon who, despite being initially met with scepticism, has proven to be a popular leader and a substantially uniting force for the country.

The dust had scarcely settled on the aftermath of the referendum’s outcome when the people of Scotland were dragged once more into political upheaval by the beginnings of the Brexit campaign. This time, however, the vote proved to unite rather than divide the country which – unlike its English and Welsh counterparts – voted overwhelmingly against the UK leaving the European Union. Only 38% of Scots voted in favour of Leave, with every single constituency voting majority Remain.[3]  Internal political tensions were aggravated further with the recent return of media attention to Brexit Withdrawal Agreement developments. The disastrous attempt made by Boris Johnson to acquire rights to unilaterally revoke parts of the agreement made just months ago has been heavily criticized for the potential effect it would have on Britain’s international reputation in order to avoid trade barriers between UK countries.

Furthermore, the decision to pass the Withdrawal Act without the approval of the devolved assemblies (i.e. the governments of Scotland, Wales and Northern Ireland) in breach of the Sewell Convention has led to complaints from the Scottish and Welsh governments. The Sewel Convention states that the UK Parliament will “not normally” legislate on devolved matters without the consent of the devolved legislatures. However, the convention is just that – a convention with no legal force. UK Parliamentary sovereignty (the central principal of the UK constitution) means that parliament can proceed with legislation regardless. The basis of the complaints is that it diminishes the power of the devolved legislatures, resulting in a reduction of the control individual UK countries (other than England) have over their internal affairs.

Those who felt themselves gradually drifting from a pro-Union stance since the onset of the Brexit fiasco had their doubts consolidated by the UK’s response to the COVID19 pandemic.[4] Media reports over recent months have demonstrated a sharp increase in sympathy towards the independence movement among Scots.[5] Contrary to a growing sense of despair toward the British government’s response to the crisis, a recent YouGov survey carried out for The Times in August found Nicola Sturgeon’s net approval rating to be at +50, while Boris Johnson’s had fallen to -50. The same survey revealed that Scottish independence stands at a record high of 53% (up from 45% in 2018).

This Scottish government’s handling of the pandemic has been widely praised and the country’s statistics show that it is so far faring better than England in terms of the number of cases and hospitalisations etcetera. The pandemic has highlighted the advantages of devolved power and given Scots something of a taste of the freedom which could be enjoyed as an independent nation. Another reason for the apparent surge in patriotic sentiment could also be the effect that the pandemic travel restrictions has had on this year’s summer holidays. Many of those working from home or furloughed were obliged to take their annual holidays, despite not being able to indulge in typical summer getaways to Mediterranean beaches.

The restrictions resulted in a boom in internal tourism, as Scots who would usually take their holidays in Spain or Greece turned, for the first time in many cases, to the landscapes and nature of their home country. The impressive mountains, lochs and beaches of Scotland’s west coast which over the years have become neglected as holiday destinations by the Scottish population were subject to rediscovery by a generation of young Scots this summer, who plastered Instagram with images of astonishingly blue seas captioned “is this Scotland?!”.

Many believe that a majority win for the SNP party in the elections of May 2021 will guarantee a second independence referendum, but to what extent is this true? Boris Johnson has until now vehemently denied the possibility for a second referendum, branding it as a “once in a generation” opportunity and insists that there will not be another vote on the matter. However, the increasing popularity of the SNP would suggest that the party stands a high chance of securing a comfortable majority in the next elections.

Speaking to the BBC earlier this month, Professor of Politics John Curtice argued that regardless of the promises made by previous party leaders (ie that the SNP would not appeal for a second referendum after the initial ‘no’ result), the electorate cannot be bound by those promises if they elect the SNP based on their campaign pledge to secure a second referendum. The legal details of the right to a second referendum are seemingly obscure, with experts unable to provide a clear answer as to whether the Scottish government holds any mechanism capable of triggering another vote on the issue.[6]

The only certainty in all of this is that until the pandemic is over, no further developments can be made. In the meantime, Nicola Sturgeon’s management of the crisis will undoubtedly be a deal-breaker in the next local elections.