On September 12, the European Parliament voted on the triggering of Article 7 measures against Hungary. With 448 votes in favor of the motion, 197 against and 48 abstentions the required majority was achieved[1]. Now, the Council of the European Union has to approve the vote unanimously in order to launch possible sanctions. The Hungarian government, accused of silencing critical media, targeting academics and NGOs as well as removing independent judges, said the decision was an insult to the Hungarian nation and people[2].

What is the Article 7 about?

Article 7 of the Treaty on European Union states that the EU can take measures in case “there is a clear risk of a serious breach by a Member State of the values referred to in Article 2“[3]. These include “human dignity, freedom, democracy, equality, the rule of law and respect for human rights, including the rights of persons belonging to minorities”[4]. Members of the European Parliament must support the resolution by two thirds in order to launch the Article 7 procedure as it happened last month in Strasbourg in the case of Hungary. With this vote, it is now possible for the Council of the European Union to make demands to the Hungarian government in order to improve the situation and even launch punitive measures if the requirements are not fulfilled. Possible sanctions may be a harder access to EU funding and can even lead to the loss of voting rights in the EU institutions.

Besides the treatment of refugees and the refusal to participate in the European refugee policy, the downfall of media pluralism in Hungary is worrisome. The Hungarian Prime Minister, Viktor Orbán, is criticized for homogenizing and instrumentalizing the Hungarian media landscape. Although Hungary isn’t the lowest ranked European country by Reporters without borders (RSF) with regards to press freedom, a deterioration of the situation can be observed[5]. The NGO states that Hungarian media houses are bought up by businessmen closely tied to Viktor Orbán’s national-conservative party Fidesz. In this way the media coverage can be controlled easily and even abused for political interest. RSF reports on two co-existing media bubbles in Hungary: “One, created by pro-government and pro-Fidesz media outlets, is obsessed with migration, the ‘defence of Hungary and its borders’ and its hate campaign against the Hungarian-American billionaire philanthropist George Soros. The other is focused on finding corruption scandals”[6]. After the Hungarian elections in April the last national daily newspaper that was not close to the government, Magyar Nemzet, was shut down. By gaining control over the media coverage the nationalistic discourse will now dominate. 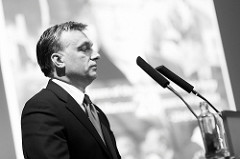 The government is also eager to minimize foreign countries’ influence on media and education as the conflict with the (US-based) Central European University in Budapest and its founder George Soros shows. For all these reasons the formal resolution of the MEPs called in May for “the Hungarian Government to repeal laws tightening rules against asylum-seekers and non-governmental organisations, and to reach an agreement with the US authorities, making it possible for Central European University to remain in Budapest as a free institution”[7]. Shortly after the vote at the European Parliament on September 12, Prime Minister Viktor Orbán accused the European Union of blackmailing, declaring the vote to trigger Article 7 was an attempt to force the Hungarian government to support the European migration policy[8]. Already in his statement at the European Parliament in Strasbourg the day before the vote, the Hungarian Prime Minister Viktor Orbán declared it was an unfair treatment although Hungary “has been a member of the family of Christian nations for a thousand years”[9]. The recourse to common European values and history seems ironic in this context since pluralism, solidarity and collaboration are facing quite some obstacles in Hungary at the moment also according to European Commission President Jean-Claude Juncker[10].

What does this decision tell about the future of the European Union?

Article 7 was originally introduced to ensure democracy, pluralism and justice to be maintained after the EU accession with regards to younger member states. It was meant to strengthen and uphold the key values and principles of the European Union[11]. The votes on triggering Article 7 measures against Hungary and also Poland in December 2017 show that there has been a drifting from these values. Also, other disintegrating forces such as the Brexit and the rise of nationalist and eurosceptic movements and parties throughout the Union, question the Union´s ability to keep its sheep together. Sanctions or at least a formal warning against Hungary may be a first step to actually defeat these forces. Although Conservative MEPs rather opposed the Article 7 voting since they saw it as an interference in the country’s domestic politics, the support of the voting by the leader of the European People’s Party (EPP) Manfred Weber shows that anti-European national go-it-alones will no longer be tolerated in the “European family”[12].
Hungary is only the second nation that faced an Article 7 vote. In December 2017 there was also a resolution against Poland’s ruling party’s PiS remodeling of the Polish legal system[13]. Since actual sanctions now still must be approved unanimously by the European Council, it is very probable that Poland will block the Parliament’s decision as it is not in their own interest. In addition, Hungary declared in this context that they wouldn’t support serious sanctions against Poland. As now the Polish government reassured Hungary in the same way, the trigger of the Article 7 will only remain a finger-wagging.