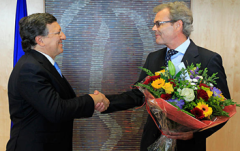 “The Norwegian Nobel Committee has decided that the Nobel Peace Prize for 2012 is to be awarded to the European Union. The Union and its forerunners have over six decades contributed to the advancement of peace and reconciliation, democracy and human rights in Europe”.

What for? This was my first reaction after reading the news announcing that the recipient of the Nobel Peace Prize for 2012 would be the European Union. The first thing I did was to check the Internet and Facebook to find out whether there would be any reaction to the news. I had the feeling this would be a big issue and would raise a huge debate. And so it did.

Dozens of posts and comments disapproved the decision. For the ‘Euroscepticists’, it was a scandal, an ideal statement of support to the policies that have led the Union to its worst economic crisis since its foundation. The UK Independence Party through its leader condemned the award. Professors, politicians and journalists commented on the decision referring to the current financial crisis and the austerity measures which have decreased living standards in Greece, Spain and Portugal, stating that the moment of the decision was rather wrong. Pictures of riots in countries which are facing the debt crisis were shown in articles referring to the announcement of the reward. Some would say it is a paradox that the Norwegian Nobel Committee bestows this award to an organisation which the Norwegian people have rejected twice in referendums.

To be honest, influenced by the above views, I too was about to make a negative comment on the matter, but I held myself back and decided to have a better look at the words of the head of the Nobel Committee, Thorbjørn Jagland. I actually changed my mind after focusing on his words and their meaning.
“Why not?” Let us think what Europe was like over previous centuries, especially during the first fifty years of the 20th century. Beyond a doubt, this continent was the deadliest battlefield in world history and a place where monstrous crimes were committed. The end of Second World War gave Europe one more chance to finish the project to achieve peace among its states. The end of the war found Europe economically, politically, socially and also culturally wrecked, trying to rise from its ashes, while the new era was characterised by the beginning of the ‘Cold War’, the struggle for world dominance between the USA and the Soviet Union. These correlations set Europe aside of political power ininternational issues, however the European Community managed to keep peace within its borders at a time where conflicts were spread all over the world. Moreover, the European former ’Client’ States, one by one after their transition from dictatorships or authoritarian regimes to democracies, decided to join the European family which was gradually expanding.

It is clear that the European Community was becoming a desideratum for states that had suffered the consequences of political instability (e.g. Greece, Spain, Portugal) and its security values were based on preparing the ground for peace and development.
These security values proved crucial for the avoidance of clashes and turbulence between members of the European Union, former enemies for centuries. The only aspect in which the Union failed as far as peace is concerned was its inadequacy to construct an effective worldwide peacekeeping factor, a reality which was confirmed by some examples such as the Balkan crisis and the NATO bombing in Yugoslavia. External intervention is a problem in which Europe should take more initiative to solve, raising the issues of having a more solid common foreign security policy. (enhanced by the fact that it was in a European sovereign state that the bombings took place for the first time).

Nowadays, Europe’s influence on geopolitical matters has increased and almost reached its peak with the crisis in Libya. By deciding to support the transition to democracy by imposing sanctions against the Gaddafi regime, the EU facilitated the operations of the rebel fighters. However, the desirable results we would expect after the end of the war in Libya have not been achieved. There are many arguments accusing the EU of an ambiguous attitude towards the problem which did not really contribute to a complete solution, but to a chaotic situation in the Arab state. Views like this became common especially after the death of US Ambassador, John Christopher Stevens and three other employees in Benghazi.

Bearing in mind that events such as these happened recently, the fact that the award was given to EU this year sounds odd to many people. Many consider this not as an honest reward of actions but as unreasonable whilst the organisation struggles to overcome huge economic, social and political crises, and while the respect of human rights and reconciliation after the two World Wars is still in process.

However, we have to realize that the EU was awarded the Nobel Peace Prize and not the Economic Sciences Prize, which this year was awarded to two US economists, Alvin Roth and Lloyd Shapley. It is not the Eurozone project or the common market which have been awarded a prize but the success of the EU to promote peace, democracy and human rights.

Despite the controversies, however, the EU and Europeans should be proud to say that they have been awarded with the prestigious Nobel Peace Prize.. And the Prize should be used as a reminder to all of those who might forget the real reasons why the Union was established. The challenge is on…

Ioannis was born in Athens and studied Political Science and History at Panteion University. He is studying MA Euroculture at the University of Goettingen in Germany and Uppsala University in Sweden, andis currently doing an internship at the Greek Consulate in Istanbul. He is interested in International Relations, European Affairs, the History of Politics and Peace and Conflict Resolution. He loves sports, travelling and does not believe strictly in one dogma or ideology in order to leave space in his mind for new ideas and thoughts.